Here are questions that come up all the time.  These are harvested from our FaceBook traffic.  We’ll be adding to this as time goes on.

Q:  ISN’T THE REAL PROBLEM SOMETHING TO DO WITH SOCIETY OR WITH PRIVATE POSSESSION OF GUNS OR WITH POLICE PRACTICES?

A:  MAYBE, BUT WE AREN’T WAITING AROUND

Q:  WHY USE A NON-FATAL ROUND?

A:  IN A MODERN, CIVIL, POST-INDUSTRIAL SOCIETY, THE REASON TO SHOOT SOMEONE IS ACTUALLY TO TAKE THEM OUT OF THE FIGHT.

In civil society, shootings tend to be followed by ambulances, police backups, and TV news helicopters within moments.  Killing is not necessary to protect a law enforcement officer – what is necessary is to take the suspect out of the fight as quickly as possible.

If you believe that high lethality is necessary in order to insure a suspect is taken out of the fight, you’re excused.  That’s a common belief.  Remarkably, however, it’s demonstrably NOT true! 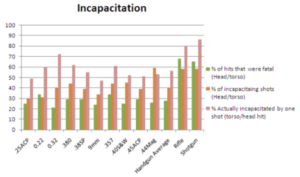 That’s because stopping power is mostly correlated with luck!  Specifically, it’s correlated with injury to a vital internal organ, a critical bone, a major nerve bundle, or a major artery.  Many people who’ve been shot – including those who’ve been seriously wounded – report questioning whether they’ve been hit or not.

The human body simply does not have many internal pain nerve endings!  [The pleural membranes surrounding the lungs are exceptions, which is why pneumonia is painful.]  By contrast, the skin is packed with pain nerve endings.  The key to genuine stopping power on the first shot is to distribute massive pain to the skin.

A:  WAIT TILL YOU SEE THE SNK ROUND.  IT’S “REALER” THAN ANYTHING YOU’RE SHOOTING NOW.

Non-Fatal rounds you’ve seen up to this point, such as TASERs or bean bag rounds, are either very effective in special situations, or else are totally impractical, meaning you never see them in actual use.

The SNK Round is different.  It’s being engineered to use NEARLY ALL of its kinetic energy to cause a massive, bleeding, nightmarishly painful surface wound, roughly the size of a dinner plate, that will take someone out of the fight NOW.  To visualize this, consider taking off ALL your clothes, getting on a motorcycle, taking it up to 60 miles per hour, and then jumping off onto rough pavement.  Nobody will return fire with a massive skin wound like that.

Conventional rounds waste their kinetic energy in producing internal rounds that may or may not take someone out of the fight instantly.  This is understandably a very difficult concept to grasp, since traditionally, it’s been assumed that taking someone out of the fight [stopping power] was basically the same thing as lethality.  The problem is, that’s not actually correct, and never has been.

Stopping power from a bullet wound is related to “medical luck of the draw”.  Extensive damage to major nerves, arteries, internal organs, or bones clearly might take someone out of the fight instantly, but in many cases, even non-survivable wounds can still allow a suspect to stay in the fight long enough to kill law enforcement officers.  That’s because internal wounds may or may not involve enough pain neurons to make continued fighting impossible, despite ultimately being lethal.   People have even been known to wonder if they were shot or not, even in the case of wounds that prove fatal.

By contrast, no one who has had about 100 square inches of skin ripped apart by an SNK Round “wonders if they’ve been hit”.  They are DOWN, and OUT OF THE FIGHT.  NOW.  The fact that they’ll probably survive is a “plus”.

A:  THAT’S A PHILOSOPHICAL QUESTION WE DO NOT PRETEND TO ANSWER, AND IF WE DID, THE QUESTION ABOUT WHAT TO DO ABOUT IT WOULD STILL BE AN OPEN ONE.

At SNK, we do not intend to capitalize on any specific tragedy involving an accidental gun death… anyone can look them up on the web.  We all know they happen all the time.  In our view, preventing even one such death is preferable to letting any number of truly evil people hit the floor, in screaming agony, head to the prison ward of the local hospital, and letting the courts deal with them.  Yes, we’re patriotic enough to believe the the American system of jurisprudence.

Many, many FaceBook commenters on this topic seem to feel exempt from this concern, since they assume their aim is perfect, their discretion is perfect, and they’ve taught their children about guns so perfectly that no unintended deaths are possible.  One of us, Dave, was a sworn law enforcement officer for 22 years, and the other of us, Wayne, was a parachute rigger for many years, a deep sea diver for several years, a flight instructor for several years, and a nuclear physicist for many years.  Both of us were in counterterrorism.  So, by  contrast, we actually believe fatal accidents happen – in police work, skydiving, aviation, nuclear technology, and counterterrorism.  Our tradeoff remains the same… Better to see a lot of badguys behind bars than attend even ONE funeral for a fallen officer, a dead child, or a poor unfortunate who didn’t take his or her meds.

Q:  IF SOMEONE COMES THRU MY DOOR, THEY DESERVE TO DIE

Bernie Madoff deserves 100,000 years in jail, but biology will intervene.  Life’s not fair – in many ways.  If you have to design an entire SYSTEM, then you go for the safest one.

Q:  HOW DO WE FEEL ABOUT THE SECOND AMENDMENT?

A:  IT’S IMMATERIAL FOR THE SNK ROUND.  WE DON’T EVEN GET INTO IT.

The SNK is breakthrough technology to make the use of firearms safer.  We consider it to be similar to the StopSaw device, a patented finger detection system that stops a spinning circular saw blade within 5 milliseconds of contacting a human finger, preventing injuries to operators, in that it is value neutral.

Q:  YOU SAID THE SNK ROUND IS PATENT PENDING.  WHERE CAN I SEE THE PATENT APPLICATION?

A:  THE US PATENT AND TRADEMARK OFFICE CAN BE SLOW TO PUBLISH PATENT APPLICATIONS.  SO HERE IT IS FROM OUR SERVER.

We are out to save lives.